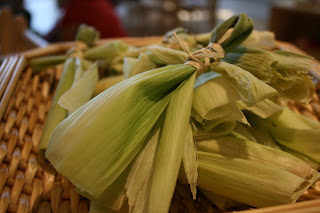 To initiate a week long celebration of autumn, we decorated the school with pumpkins of many shapes and varieties and tied several corn stalk bundles to the arbors and gates. We then began an investigation of many fall related things, including corn. 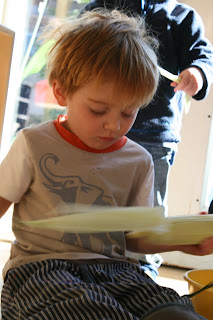 The students shucked the corn, many of them had never done so, carefully removing the husks and the silks and saving them for future use in the studio. 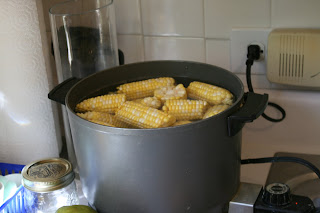 Then, of course, we had the great reward of EATING the corn right off the cob. 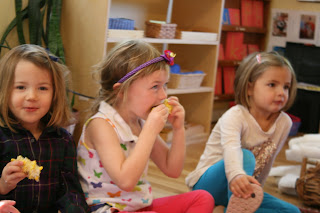 Corn has many uses. The husks alone can be used for tamales, decorations and corn husk dolls. Once the corn was shucked and eaten, the green husks were carefully tied into several small dolls. The children were interested. So, I purchased several bags of dried corn husks (the kind you use for tamales) at a local mexican market, soaked them in warm water and used these to make more corn husk dolls. As I made the dolls, the children and I talked about other kids who lived here hundreds of years ago. In a time when they didn’t go to a store to purchase a toy, but instead looked around at the things in their own home and yards, and used these supplies to craft their toys. All the while I carefully tied the husks into a doll body. When the doll was finished, I explained that the doll could now be dressed and decorated in any way they wanted, pointing to a variety of containers filled with interesting fabric, buttons, yarn, feathers, raffia, etc.
Over the next several days, the children made a village of dolls, each as unique and creative as the imaginations of their maker.
Here are just a few examples: 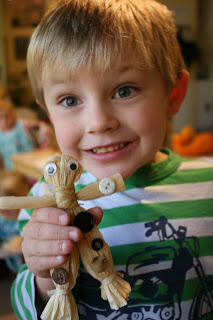 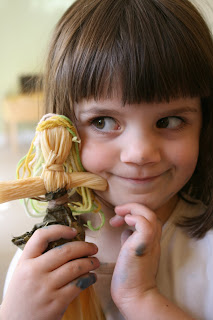 The toddler classes were invited to paint their corn husk dolls and then bring them home. 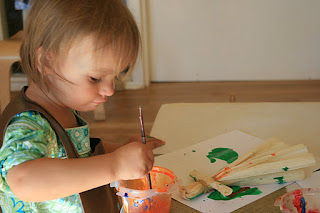 In closing this post, I’d like to extend a heartfelt wish. I hope that each of you escape into the crisp fall air and feast your senses on the magesty of the season with at least a smidgen of the wonder and awe that we each possessed in the heart of childhood.