Story people have emerged in the studio after a mother’s night when we introduced the process of making clothespin character’s.  Hot glue is now an essential element in the studio work time and I spend much of the day carefully (and safely) attaching an array of elements together under the careful direction and insistence of each child.  I am calling these creations “Story People” because every one of them have a story.  Here are a few examples: 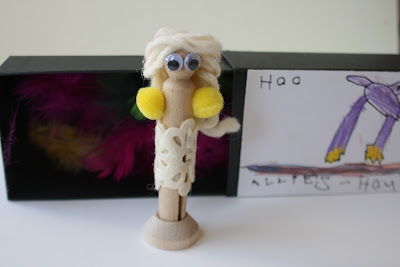 Allie lives in Maine.  She likes bananas.  She has a backyard.  Her house has paper on it so it looks beautiful.  She has a feather bed.  She likes to paint and she picks flowers every day.  Sometimes she goes on treasure hunts.  Sometimes she stays home.  When it’s summer, she stays outside and goes on trips.  When it’s winter, she stays home and watches movies and drinks hot chocolate.  She is my friend. 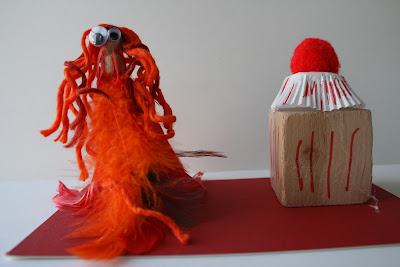 Pete lives in Hawaii.  She exploded her volcano in 152 and when the volcano exploded she made a volcano home under water and she lives there forever.  She still explodes her volcano on the biggest island of all of them.No one knows why or how she explodes her volcano.  I think she maybe shoots out the fire and maybe she gets shot out too and becomes fire before going back to earth 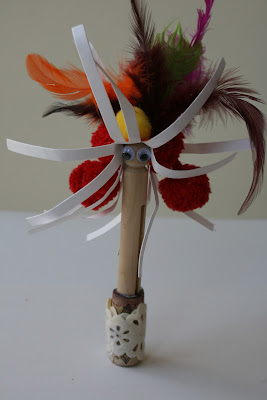 Mr. Piaong Shrimp was walking along and a bad guy touched him and he became a bad guy too and the bad gy became him.  He hit people every day.  He stays where he can push people.  The police got him but he broke their car.  He smacked them and had to go to jail.  When the good guy touched him again, he turned back and he went out and the bad guy went in and that’s the end.